Warning: count(): Parameter must be an array or an object that implements Countable in /var/www_blog/advice.cruise118.com/htdocs/wp-content/themes/crusie118-cruise-advice/library/metabox/init.php on line 714
 Norwegian Getaway: Sheer Spectacle - All About Cruise

We sent Cruise118.com’s Jim Taylor aboard Norwegian Cruise Lines’ Norwegian Getaway. Here’s what he made of the experience:

Having read about the Norwegian Getaway for months previous to my cruise; researching the Illusionairum with an uncomfortable level of fervour (it’s Houdini crossed with gourmet food, don’t judge me), following every press release and looking over the deck plans down to the minute detail, I thought I would be well prepared for the size of the newest member of the Norwegian Cruise Line family.

I was completely wrong.

Having never visited a cruise ship before this, the exact scale of the ship was something I never took into account as I was getting ready to board. But even without a frame of reference, the Getaway is absolutely massive.

rand everything on the Norwegian Getaway feels. It was only after heading into the main body proper and searching out my stateroom did the impact really hit me. The length of a corridor. That’s all it took.  Ridiculous I know, but the hallways linking the impressive staterooms and suites seemed to go on forever. At first I was awestruck trying to find my room, then I realised that each deck had multiple corridors just like this one, lining the ship for hundreds of feet. And I hadn’t even run to the Illusionairum like a giggling schoolgirl yet.

I don’t mind if you chuckle at the sheer naiveté of it, but it puts into perspective how impressive the Norwegian Getaway was from the very outset. At the time, I hadn’t even opened my stateroom door, so touring the ship was, to put it mildly, eye-opening.

The beating heart of the Norwegian Getaway is the Atrium, 3 decks of bars, restaurants, and entertainment connected by a single spiral glass staircase, all overlooked by a chandelier that was shining plumes of purple and red shades for the occasion. Those bright colours seemed to fall on everything a cruiser could wish for, all in a single, elegant space. Casino tables, whiskey bars, regional restaurants serving up everything from New York strip steaks to Teppanyaki… I thought that eventually the Atrium would stop throwing up wonders for me to enjoy, especially when I was running around like a headless chicken trying to do literally everything.

It turned out I was a pretty fortuitous headless chicken at times. The Svedka and Inniskillin Ice Bar was booked out for the entire night, but with just a quick word with a concierge from a nimble colleague early doors, I ended up 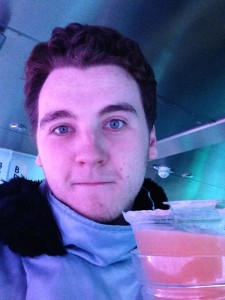 dressed from head to toe in an Arctic weather coat, clutching an icy cocktail in one gloved hand, and taking ridiculous selfies with the other.

See right – evidence of smugness surviving even in extreme cold.

If you haven’t heard of this night spot, you’re probably the first, as throughout the entire night I spent on the Norwegian Getaway the line of pseudo-eskimos waiting patiently for entrance into its frozen doors grew into the dozens. Everything was made of ice, from the bar itself to the chairs, even the glasses, and to put it bluntly, at -8 Celsius, vodka goes down really well. This probably explains why prestigious guests were swapping their tuxedos for fur-lined ponchos at every opportunity.

The uniqueness of the ice bar was something shared with plenty of features on the Norwegian Getaway. Exploring the very top deck was as riveting as soaking up the atmosphere of the atrium. The gargantuan water slides had my inner child begging me to dive into the Spongebob Squarepants pool, suit jacket and all, but stumbling upon the staging area for Spice H20 was a surprising delight as well. 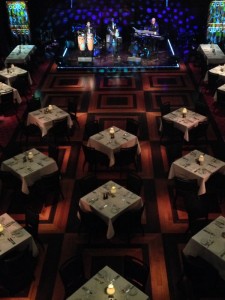 sailing, before it becomes a staple of the Eastern Caribbean cruise scene. Even though the revellers weren’t there, the sight of a giant Technicolor screen at the very top of the ship once again brought home the sheer spectacle the Norwegian Getaway created without dispensing with the elegance of classic cruising.

As much as I would love to talk about the Norwegian Getaway more, the ship was so huge and exciting as to deserve days, even weeks of patronage to get to know everything it has in store. For a lucky cadre of cruisers embarking with this brand new ship to New York, they’ll have that opportunity to explore every nook and cranny.

For me, it was a pleasure to simply wander around with my mouth open like a guppy in a suit and shirt, soaking up every minute of my evening on board.