Warning: count(): Parameter must be an array or an object that implements Countable in /var/www_blog/advice.cruise118.com/htdocs/wp-content/themes/crusie118-cruise-advice/library/metabox/init.php on line 714
 Explore the extraordinary MSC Bellissima

MSC Bellissima, the new flagship for MSC Cruises, was launched at a star-studded ceremony in Southampton in March. Screen siren Sophia Loren did the honours as godmother, Holly Willoughby officiated at the ceremony and performers included opera star Andrea Bocelli and his son, Matteo, as well as cast members from the Cirque du Soleil. As you might expect, a fair dose of this showbiz glitz is reflected in the ship, which sparkles from bow to stern.

At 171,598 tons, Bellissima is a whopper, carrying a maximum of 5,686 passengers. MSC has packed the ship with entertainment, so there’s masses to do, from high-end shopping to virtual reality rides, sports, theatre and, of course, plenty of eating and drinking. She’s a sister, albeit a bigger one, to MSC Meraviglia, so fans will find several familiar features. 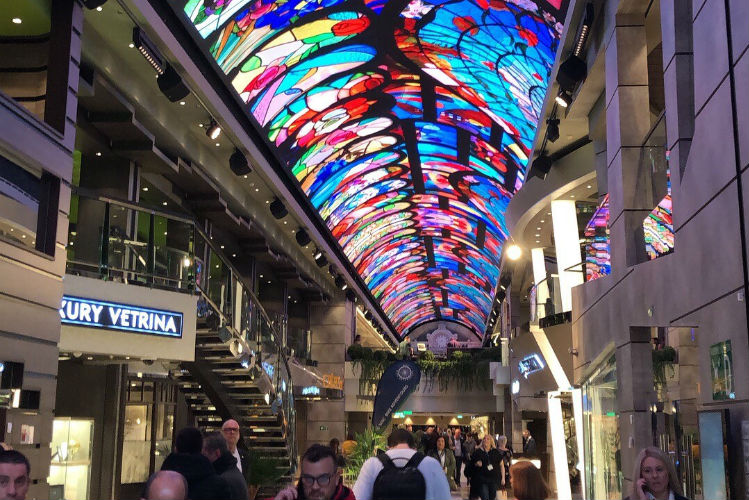 The heart of the ship is the very clever Galleria Bellissima, a 314-ft, two-deck promenade lined with bars, shops and restaurants under a 262-ft LED ‘sky’. This domed display is constantly fascinating, shimmering with sunsets and stars one minute, lush forest canopy the next and then fading into a dazzling stained glass effect. 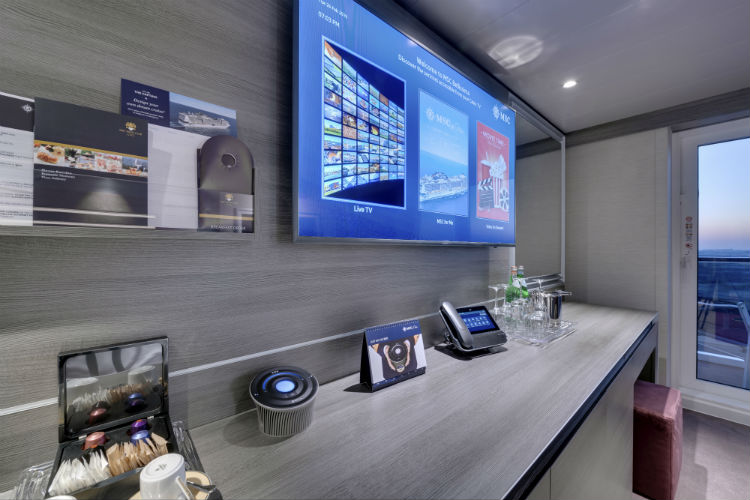 MSC’s trademark has always been its glittering Swarovski crystal staircase – the ultimate spot for formal portraits or selfies. Bellissima has six of these, sparkling with 61,000 crystals, so there’s ample opportunity to strike a pose. Other impressive features include several collaborations with celebrity chefs, a dedicated theatre for the Cirque du Soleil and, a first for MSC, a virtual ‘assistant’ in every cabin, called Zoe.

Like MSC’s other newer ships, Bellissima has a dedicated ship-within-a-ship section, the MSC Yacht Club, a complex at the front of the ship that comes with all kinds of perks, not least its own deck, pool, bar and restaurant. There are four cabin categories here, most of them spacious Deluxe Suites. 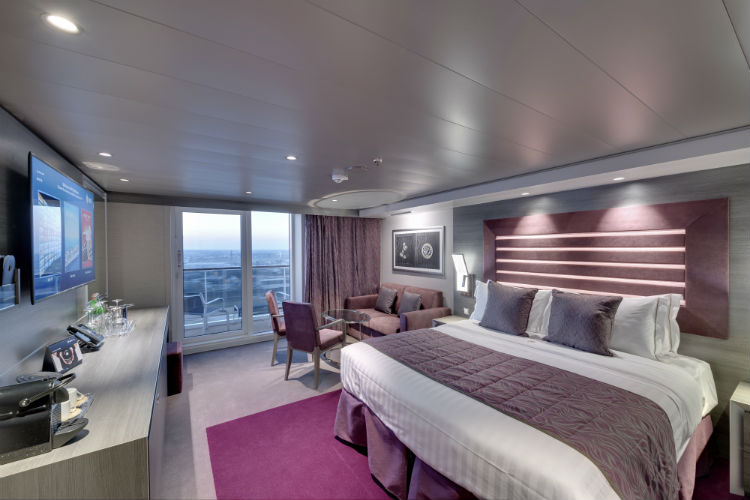 Elsewhere, the cabin category you get depends on the ‘experience’ you book – Bella, Fantastica or Aurea. These ‘experiences’ also determine to an extent where and when you eat.

The cabin décor is quite plain compared to the bling around the rest of the ship, in hues of plum, greeny-brown or burnt orange, with decent-sized balconies and compact bathrooms. 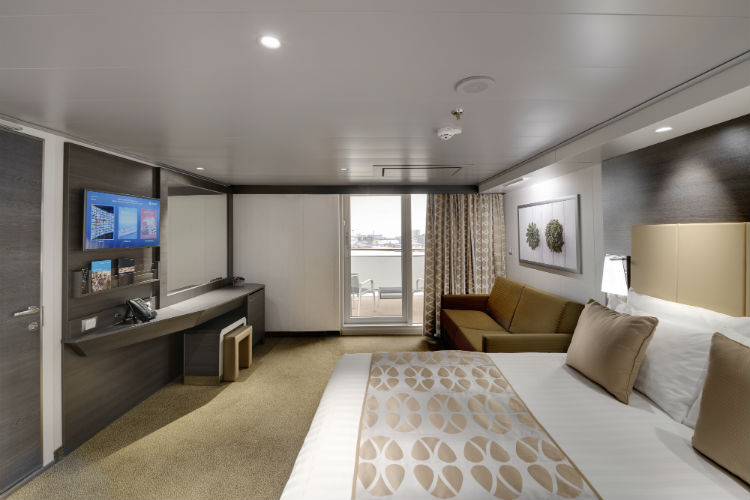 The specially designed family cabins are clever, with a double bed and two bunks behind a curtain, in a special alcove. The 34 corner suites have huge balconies and outdoor whirlpools, although they’re not part of the Yacht Club, so can’t access its private lounge and restaurant. Confusingly, though, you can book an interior cabin in the Yacht Club if you feel strongly about these perks (which are, incidentally, a haven of peace from the buzz of the main public areas). 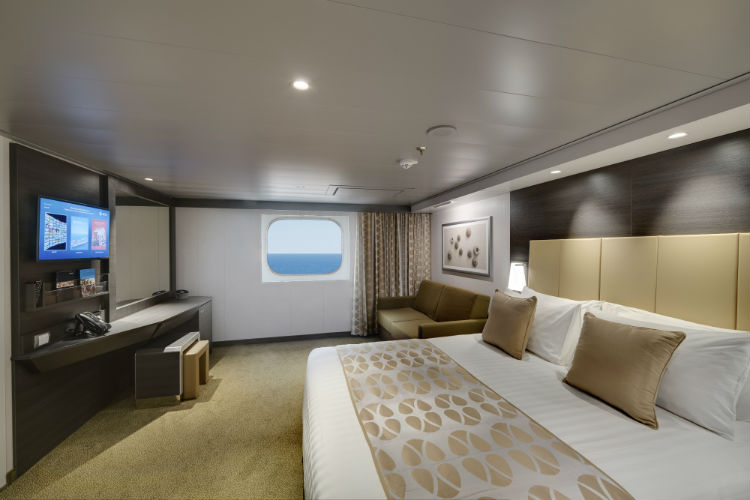 The big talking point, as it were, is Zoe, the ‘personal assistant’, like an Alexa but designed for the ship. Zoe speaks seven languages and can answer 800 questions, performing tasks like switching on the TV and telling you what’s on in the theatre that night. You can also sync it to your phone or laptop to use it as a Bluetooth speaker, which is very handy.

There are four main restaurants, spread across decks 5 and 6. Each one has three sittings, at 5pm, 8pm and 10pm, which is how the ship manages to feed so many people. If you’ve booked Yacht Club, you eat in the area’s dedicated restaurant. If you’ve booked an Aurea ‘experience’, you can eat in the Lighthouse, where the nicest tables, by the windows at the back, overlooking the wake, are reserved for Aurea guests, on an open seating basis. Everybody else has fixed seating dining. There’s a massive buffet, too, the Marketplace, which has some cool features, not least its own mozzarella factory, where you can watch chefs through a glass screen, making fresh cheeses. 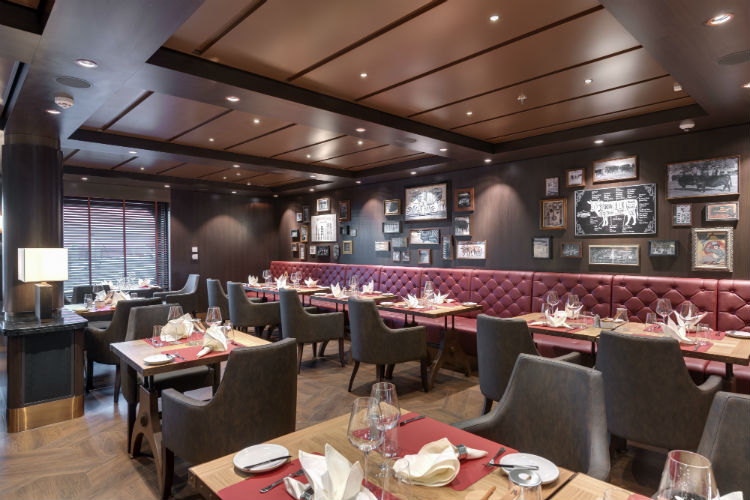 Bellissima’s speciality restaurants are surprisingly small and intimate, giving each the feel of a smart restaurant ashore. Prices are à la carte – there are no cover charges here – and are similar to what you’d find ashore, so special occasion dining isn’t cheap. The food is excellent, though. 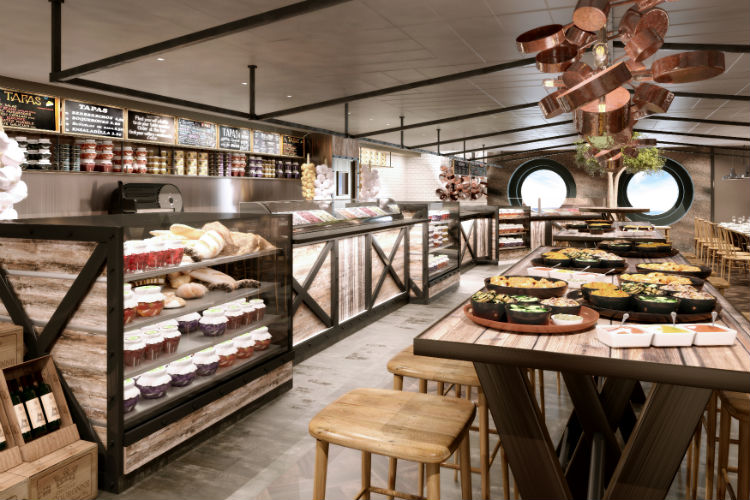 The Hola! Tapas Bar is masterminded by a two-star Michelin chef, Ramón Freixa, while L’Atelier is a bistro offering French classics. Butcher’s Cut is a steakhouse, while Kaito is a popular sushi bar and teppanyaki grill, where chefs prepare food in front of you with great theatre. Celebrated chef Raymond Blanc will prepare one dish for the ship’s Elegant Night in the main restaurants, while German megastar chef Harald Wohlfahrt, who holds three Michelin stars, will also showcase his dishes in the Yacht Club restaurant and on Elegant Night. 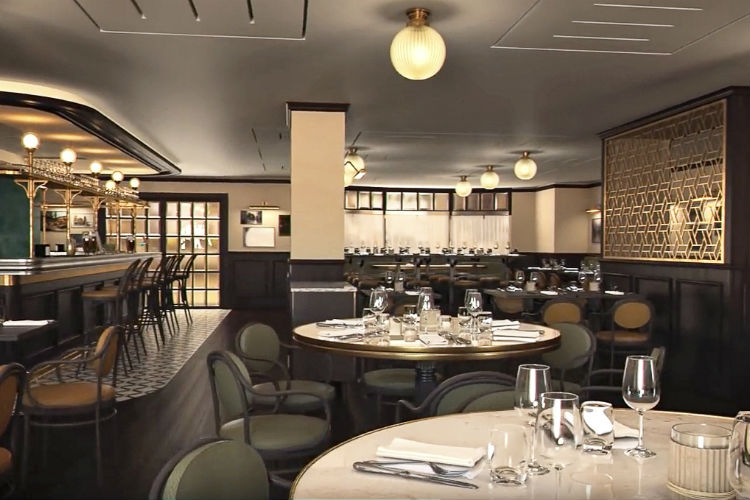 There’s another collaboration, with two-time world pastry champion Jean-Philippe Maury, whose Chocolat & Café and Crêpes & Gelato outlets on deck 6 beckon the sweet-toothed. Exquisite maracons, hand-made truffles and some seriously good ice cream (try the dulce de leche) are impossible to pass by – and there’s a chocolate factory in the café where you can watch chefs prepare each delicacy.

There’s entertainment all day long. The kids’ clubs are excellent, with a baby area for under threes, a tech lab, two dedicated Lego playrooms, a teen club and a full-length bowling alley. 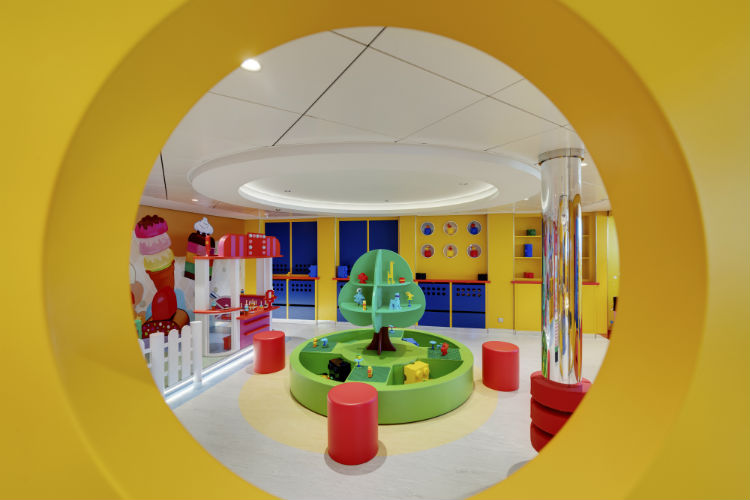 A multi-purpose sports court can be used for basketball, tennis, football or volleyball, and there’s a massive gym. There are three main pools and on Deck 19, an aquapark with waterslides, jets and a high ropes course. We loved the virtual reality cinema (€10), an interactive ‘ride’ where you shoot at the screen, and the VR Maze, an incredibly realistic, and terrifying experience (€15) where you can fight an evil Minotaur or try other games; it’s astonishingly realistic. This is a great ship on which to be a teenager, or play at being one. 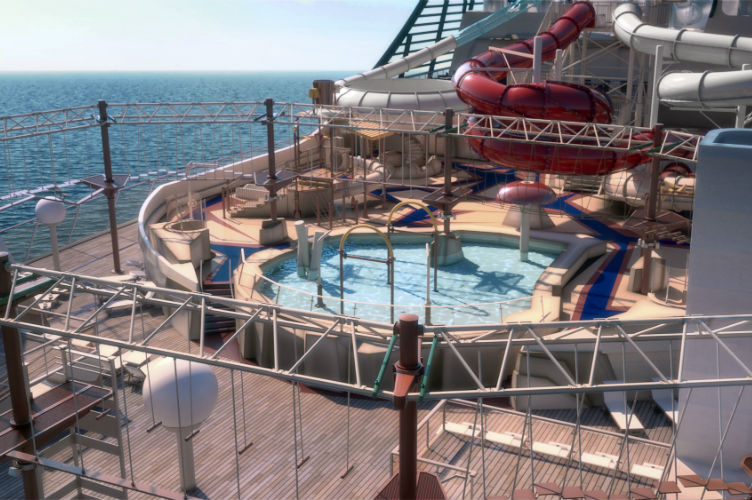 Otherwise, adults can enjoy the Aurea spa, which has a lavish thermal suite including everything from an ice cave to a salt scrub.

In the evenings, the ship comes to life as the bars fill up and there’s no shortage of choice. Our top tip? The Sky Lounge, on deck 18, with a wall of glass looking down over the pool and a great cocktail menu.

MSC Bellissima is an ideal ship for anybody who enjoys the buzz and nightlife of a busy resort. If you’re looking for a quieter environment but still want the razzle-dazzle and the dining choices, as well as the kids’ clubs, there’s always the Yacht Club, which is tranquil, very classy and surprisingly reasonably priced. We love the authenticity of the speciality restaurants, too, and the colours and vibe of the Galleria Bellissima. 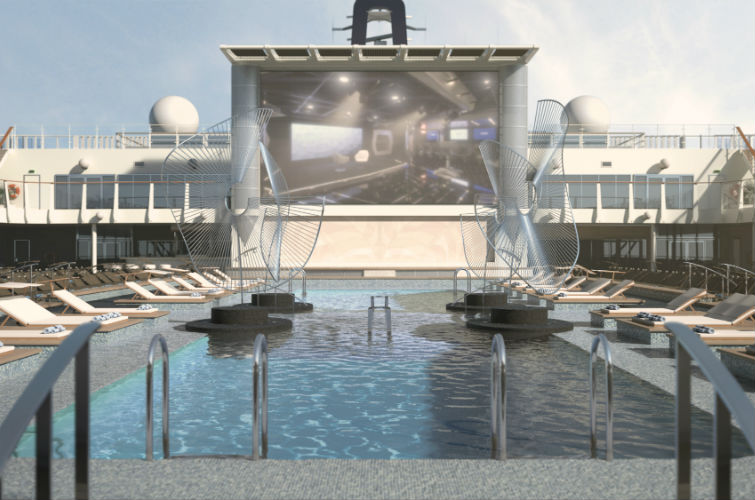 Top tip: Make sure you book ahead for the Cirque du Soleil show in the Carousel Lounge. At €35 for dinner and the show, or €15 for a cocktail and the show, it’s incredible value compared to what you’d spend on Cirque tickets ashore. There are two different shows on Bellissima, both spectacular. 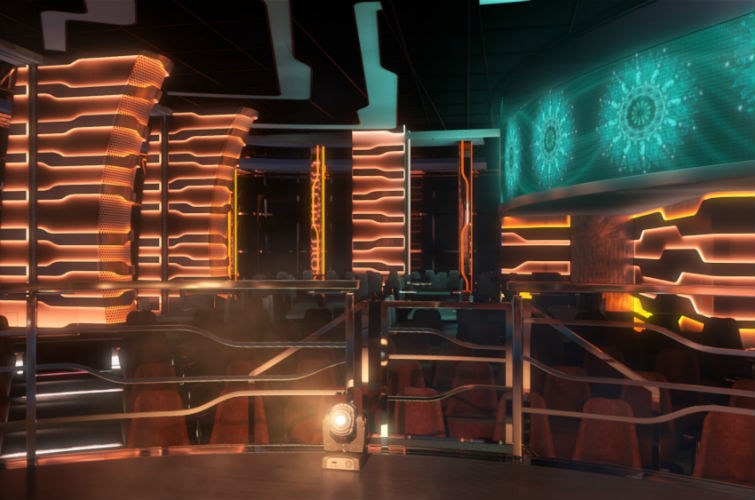 Another tip: If you like the idea of speciality dining, there are good savings to be had with three packages, the cheapest of which, at €81, buys you dinner in three of the restaurants, with a limited but reasonable selection from the menu in each. Let them know ahead if you’re vegetarian, though. 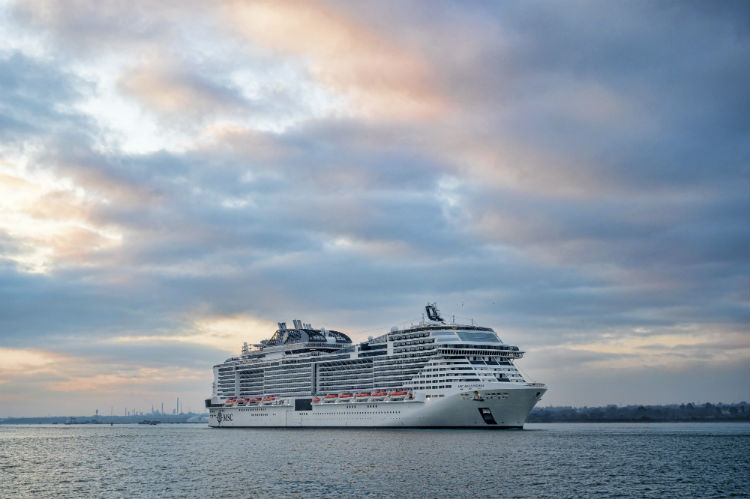 If you’re keen to experience this ship for yourself, find all our latest cruise deals by clicking the button below. For any further information or help booking your chosen cruise, please call our Cruise Concierge team on 0808 1234 118 for expert advice and award-winning customer service with your booking.