In cruise ship terms, Holland America Line’s ms Oosterdam is getting on a bit. Launched in 2003 as the first in the line’s Vista-class ships, it is also reasonably small at 1,964 passengers when compared with today’s industry average of around 3,000-plus among mainstream lines.  However, in common with all Holland America Line ships, the navy hull gives it a smart look which hints at the classic, understated ambience the line is known for. ms Oosterdam isn’t a ship that is prone to flashiness and glitz. As part of a $300 million fleet enhancement programme, it has been refurbished with new venues, facilities and revitalised suites. Further work is due in April (2018) when its Explorations Cafe and Crow’s Nest will be redeveloped to Explorations Central, a new enhanced ‘immersion’ area that adds to the existing facility with various high-tech gadgets including interactive screens and a ‘virtual bridge’. 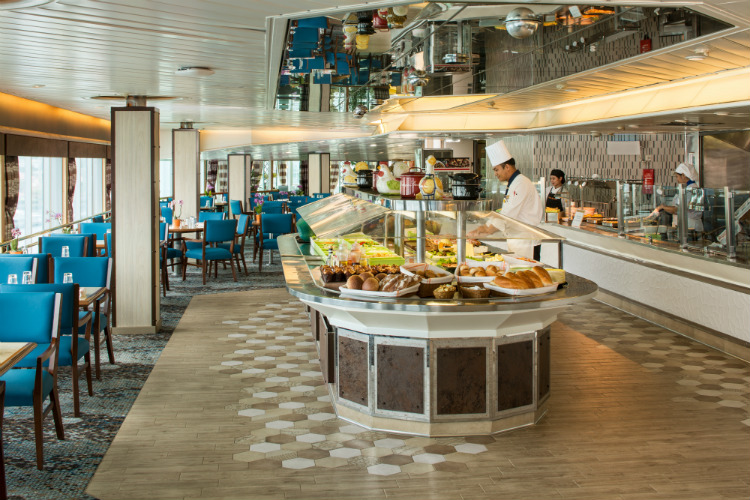 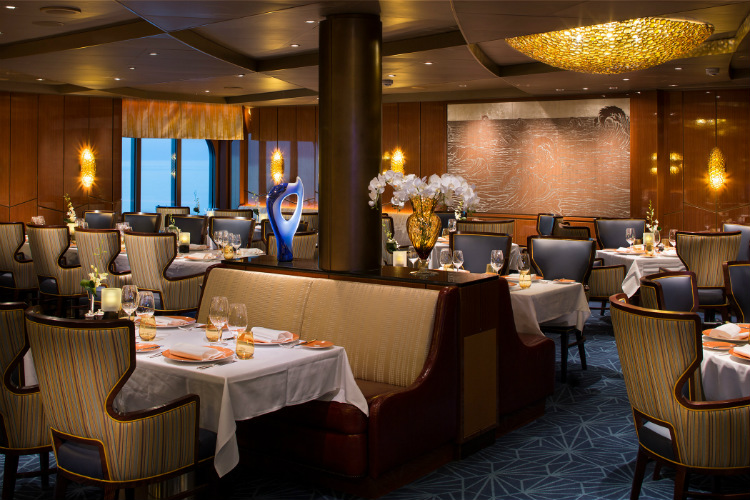 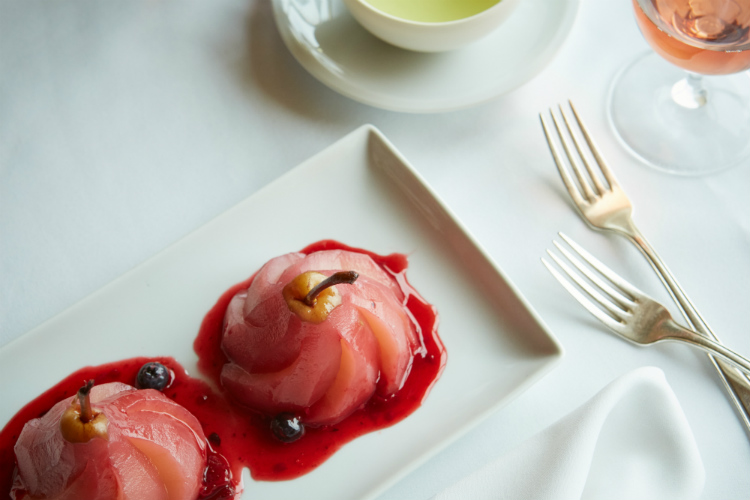 Set on two decks, the main Vista restaurant is an elegant venue, though during my stay I felt dinners could be hit and miss with some dishes left standing too long before reaching the table. But overall, food was good. Following the refit, ms Oosterdam’s buffet restaurant has become the Lido Market with different food stations to ‘grab on the go’ or be made to order. The Pinnacle Grill, offering prime cuts of meat, Alaskan salmon and lobster, is a cut above – but you will pay $35pp to dine here, though it is a quality experience. It’s a similar story for Rudi’s Sel de Mer – the French brasserie-style seafood restaurant which originally debuted on Holland America Line’s newest ship, ms Koningsdam, and appears as a ‘pop-up’ facility in ms Oosterdam’s Pinnacle Grill with prices charged on an a la carte basis. For Italian fare, Canaletto (housed in a sectioned-off area of the Lido Market) serves up an authentic selection of dishes for a $15pp supplement. 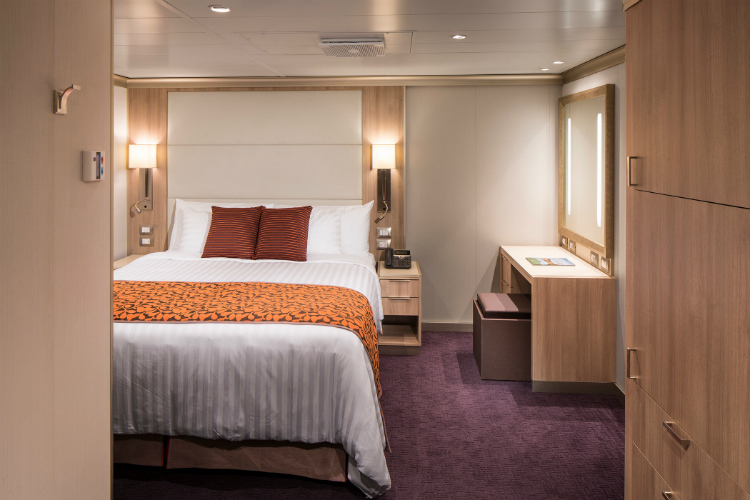 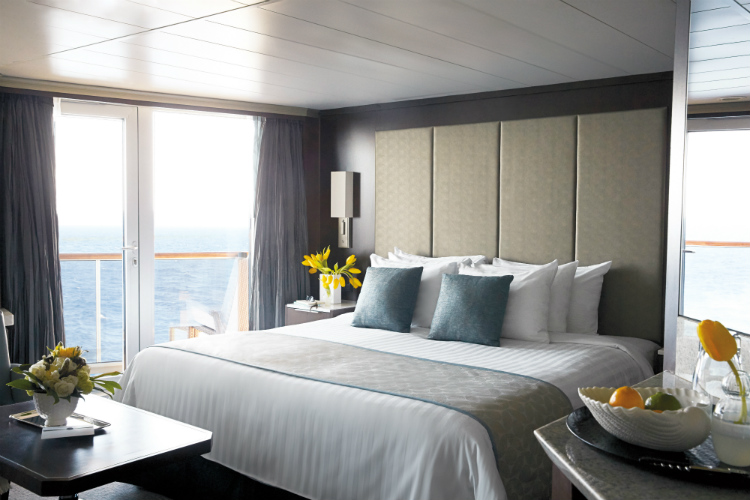 ms Oosterdam’s new-look premium suites now come with a host of free benefits that range from binoculars to use during voyages to in-suite espresso and coffee machines and expanded toiletries. Guests in Neptune or Pinnacle suites also enjoy complimentary access to the Neptune Lounge, with its own library and refreshments served during the day. Their stylish decor is in contrast to the more classic tones of navy and gold used in the Verandah, Ocean-View and Interior staterooms where the layout reflects the older age of this ship. For families, some cabins come with a sofa-bed sleeping one and a bunk bed that drops down from the ceiling, though in my experience it came down so low, I kept banging my head on it!

The upgrade has given added zest to ms Oosterdam’s entertainment line-up led by the impressive natural history concerts, films and children’s activities brought by Holland America Line’s tie-up with BBC Earth. Young and old cruisers can test their nature knowledge on ‘What on Earth?’ family game shows, while children can discover amazing animal facts on BBC fact shows that are specially targeted at youngsters. Another significant change has been the tuneful addition of more musical attractions with the ‘Music Walk’ experience that debuted on ms Koningsdam. This comprises three venues: Lincoln Center Stage featuring live chamber music; Billboard Onboard, with chart-topping favourites; and the B B King’s Blues Club and its distinctive mix of Memphis Blues. Holland America Line was one of the first lines to have show kitchens on its ships for culinary demonstrations and cookery classes and this has been bolstered by a tie-up with the America’s Test Kitchen US TV cooking show. Would-be techie fans can brush up their skills at digital workshops on everything from video-editing techniques to mastering digital photography. ms Oosterdam’s smaller size means there is not space for masses of facilities, but it still has two pools (one with a retractable roof), sports court, fitness centre and spa.

Children are well catered for with Club HAL kids’ clubs for three to 17-year-olds offering everything from themed parties to team games. On Alaska voyages, ms Oosterdam’s Club HAL comes into its own with a slew of themed diversions, culminating in a Glacier Bay scavenger hunt around the ship and a Junior Ranger programme whereby a national parks ranger comes aboard to talk to children about the local wildlife.

Don’t miss one of the scrumptious gourmet burgers from the Dive-In burger bar, especially the vegetarian portabello mushroom burger with delicious fries. And if you are feeling thirsty, make sure you try one of the cool cocktails from the swish new Gallery Bar.

Want to experience Holland America Line’s ms Oosterdam for yourself? Call our award-winning Cruise Concierge team on 0808 1234 118 to book your perfect voyage.

Gallery image with caption: The truth about norovirus on cruise ships

Gallery image with caption: Florida and the Caribbean cruise and stay: When opposites attract