Warning: count(): Parameter must be an array or an object that implements Countable in /var/www_blog/advice.cruise118.com/htdocs/wp-content/themes/crusie118-cruise-advice/library/metabox/init.php on line 714
 Join us on-board MSC Bellissima

Prior to her inaugural sailing earlier this month, MSC Bellissima hosted her naming ceremony down in Southampton. Many of our staff got to attend the glittering event, alongside celebrity guests such as Sophia Loren (godmother to the MSC Cruises’ fleet), Andrea Bocelli and Holly Willoughby! See what they thought of this brand-new ship below…

The view of MSC Bellissima in the port of Southampton was stunning and first impressions of the ship and the crew members were amazing. Embarkation was straightforward, with no queues and really friendly staff. Once we had made our way on-board it was impressive from the outset with opulent decor, crystal flooring, a grand piano and rich blue tones throughout – very striking.

All the staff we passed were lovely and smiley, they looked so happy to see us. As we walked along the corridor, we saw the stunning atrium and the Swarovski crystal staircase – which are amazing at approximately £1.5m per staircase! See what Holly Willoughby thought of the stairs below from her Instagram account @hollywillhoughby

The decor is dramatic and striking, paired with soft marble tones in the main areas. It evoked a feeling of walking through a grand hotel at sea and it was just breath-taking. There is an underlying Italian-theme in the design of the ship, with a modern and contemporary twist giving it a chic feel as you step on-board.

One of our favourite parts of the ship was the Galleria Bellissima, an 80m-long promenade which is the hub of the ship and lined with shops, bars and restaurants. The ceiling is the first thing you will notice as it’s an ever-changing LED dome – really unique and interesting.

The Inside stateroom had plenty of space, with a modern bathroom and ‘Zoe’ – MSC Cruises’ first-ever digital assistant which is equipped to help with your queries and even act as a Bluetooth speaker which is great for getting ready! The wardrobe space was okay, but not much room to put our cases away. The sink has an unusual design, which reminds you of something you would find in a cosmopolitan bar.

The Balcony stateroom was a good size and not that much different than the Inside except it had a sofa, which pulls out into a bed. It felt that if two adults and a child were to share this room it would not feel too cramped. The bathroom had a good-sized shower and there was a wardrobe with plenty of space. The balcony itself was spacious with two deck chairs to sit out on when the weather is good.

Amenities in the rooms included a TV with channels giving information on your ship and itinerary, as well as a movie section with recent films. All of these are free to watch and come in multiple languages. There is also a mini-bar which you need to pay for, but included a range of snacks and drinks. The beds in both cabins are very comfy!

The Zoe assistant is in every room on-board MSC Bellissima, which is a great piece of modern equipment similar to other popular voice-enabled devices currently on the market. You can ask Zoe what time your dining reservation is or what the weather is like and she speaks in seven languages to assist most passengers. This technology shows just how modern and innovative MSC Cruises is, and highlights the cruise line as moving with everyday technology we all know and love.

There were plenty of places on-board to eat, shop, dine and relax, with a pool on the top deck and activity sets, as well as an indoor pool and spa. There was so much for younger families and children to do on-board.

As this was the naming ceremony, there was more entertainment scheduled in that would usually occur on a typical MSC Cruises sailing. TV presenter and star of ITV, Holly Willoughby hosted the ceremony proceedings, while live music was provided by Grammy Award-winner, Nile Rodger and his band Chic.

Other special guests included Italian screen legend, Sophia Loren, who is the godmother to the entire MSC Cruises fleet. No naming ceremony would be complete without Sophia and she performed the traditional ribbon-cutting and officially named the spectacular vessel, MSC Bellissima.

Entertainment continued on into the event with a gala dinner followed by live music from UK singer, Leee John; award-winning songwriter, DJ and UK pop star, Craig David; and the extremely talented Andrea Bocelli and his son, Matteo Bocelli.

We also got the chance to enjoy a production of PINK in the London-style theatre which was fabulous and the singers were great. MSC Bellissima will also be hosting two exclusive Cirque du Soleil at Sea shows, which we got to see a preview of during our stay and it was amazing! It would definitely be worth getting a ticket to see the whole thing.

Children will love the kids’ club, which is LEGO themed! And the waterpark is very cool and free to use – great for sunny days at sea. 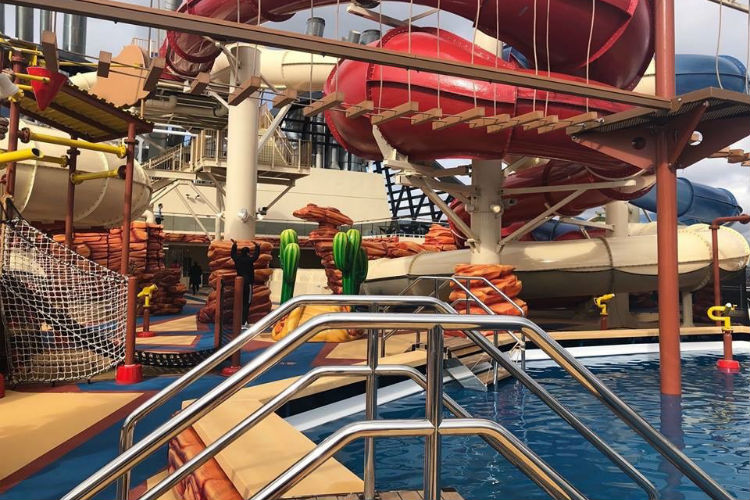 The ship also has a 4D cinema and an F1 simulator, as well as an indoor sports court, arcade, bowling alley and a VR maze. Some of these come with additional costs, but you can purchase a Fun Pass and leave with the kids to enjoy the activities. 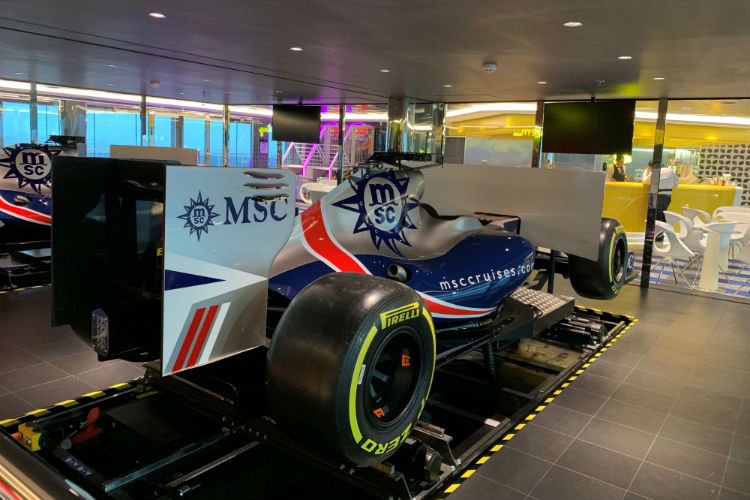 The entertainment team were very engaging and enthusiastic and did a great job of getting the passengers up dancing and having a good time!

We tried a few tasters of the ship’s dining venues, with many varieties to choose from. The Main Dining Room served many traditional Italian dishes, including ravioli and beef. There is also the Marketplace Buffet which served up food from all different countries, great for fussy eaters. There is also a chocolate shop where you can see chocolate being made – the macarons were delicious!

There are four speciality restaurants on-board MSC Bellissima: HOLA! Tapas Bar, Butcher’s Cut, Kaito Teppanyaki and L’Atelier Bistrot. You can purchase a speciality dining package to eat in three of the four of these restaurants, which we would definitely recommend as you will not be disappointed!

Classic dishes in HOLA! Tapas Bar included croquetas and tortillas, along with patatas bravas, while the Kaito Teppanyaki served a range of fresh dishes and the rice was perfect. The Butcher’s Cut venue went down a treat for us, serving amazing steak which was cooked to perfection.

There are plenty of places to enjoy a drink on-board too, including an English-style pub which played live football. Nowhere seemed too busy during our time on-board and there is a wide choice of drinks so all-inclusive would be a great option with this ship – including two prosecco options!

Everyone on-board was really friendly and couldn’t do enough given how busy the ship was during this weekend! In the buffet, the staff were welcoming and quick to clear tables away. Nothing was too much trouble for them and they were able to assist you with anything you requested.

Considering this is a brand new ship, it’s a testament to MSC Cruises for just how seamlessly the trip ran. You could tell that each member of staff genuinely cared about your experience on-board – cannot recommend them highly enough!

MSC Bellissima is an amazing ship, which had a great atmosphere during our time on-board and showed what’s to come for the innovative cruise line. We are all now really looking forward to MSC Bellissima’s sister-ship, MSC Grandiosa who launches in 2020!

The ship is a real step forward for MSC Cruises, with an exciting shift in demographic now it’s aiming to appeal to much younger audiences. If you’re a regular cruiser with Royal Caribbean or P&O Cruises but fancy a change, MSC Cruise would be a great option!

Most of the team on-board would definitely holiday on this ship and felt that guests will get good value for their money on-board. You would never have a dull day on-board and there is something for everyone to enjoy from the food to the entertainment – she certainly got us excited about what’s to come for this innovative cruise line!

If you’re keen to step on-board MSC Bellissima, click the button below and see our latest sailings on-board this stunning ship.

Call our Cruise Concierge team on 0808 1234 118 for award-winning customer service and expert advice on MSC Cruises, as well as any help with any questions you may have about MSC Bellissima.