Visiting a cruise ship is always exciting, but nothing compares to the buzz around the first sailing of a brand-new ship, especially when it’s one as impressive as Norwegian Encore!

Eleven members of the Cruise118 team were lucky enough to board this sparkly new Norwegian Cruise Line ship for her two-night inaugural cruise from Bremerhaven, Germany to Southampton. 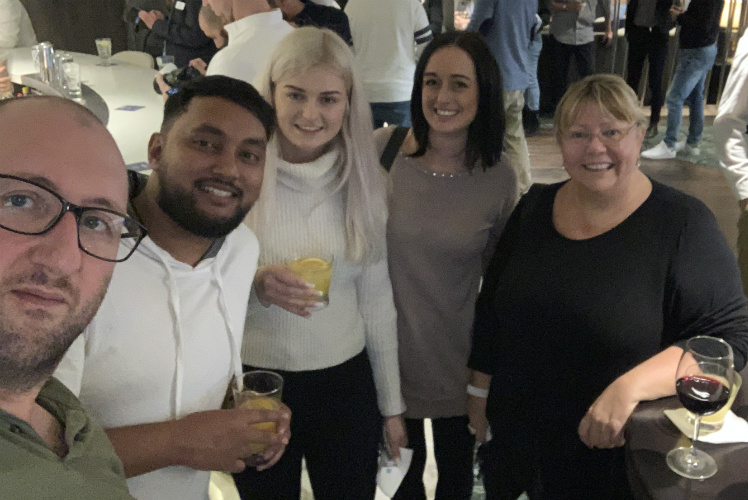 We’d heard lots about this ship before we visited. After all, a cruise ship with the longest go-kart track and the biggest outdoor laser tag arena at sea certainly stands out from the others. However, Norwegian Encore is about so much more than this!

Once onboard, we were immediately called for the muster drill, which took place in the Manhattan Room, one of the main dining restaurants. We were immediately wowed by the stylish décor and sea views from the huge window – just as much as we were by the new ship smell and the squashy new carpets. We couldn’t wait to explore. 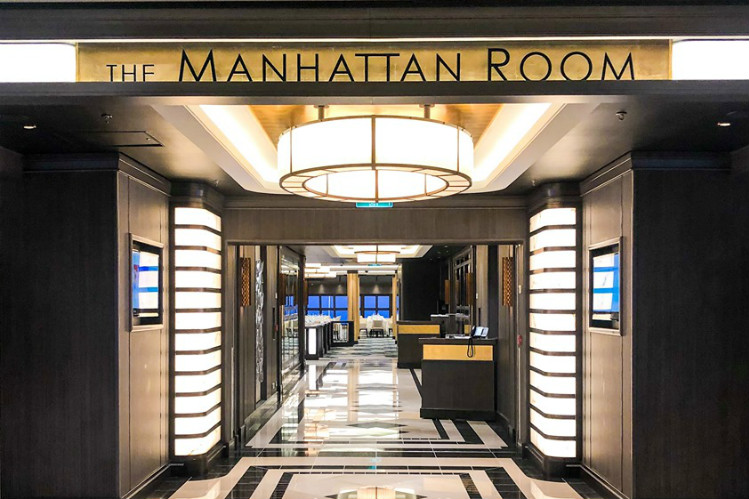 After the muster drill, we headed up to the Observation Lounge for welcome cocktails. Wow, this area was stunning! Encompassing almost half of deck 15, this huge area has 180-degree ocean views through floor to ceiling windows. It’s the perfect place to relax and enjoy a drink while you watch the scenery. 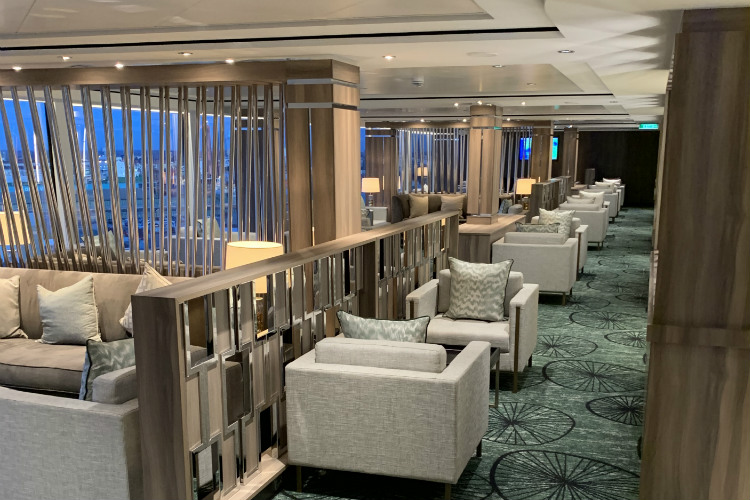 I expected a ship like Norwegian Encore to be a little brash and gaudy; she has a bright multicoloured pattern splashed across her hull. But, I was pleasantly surprised to discover that the inside of this ship is far from garish. The décor is in neutral tones of blue, grey and brown and is wonderfully elegant. 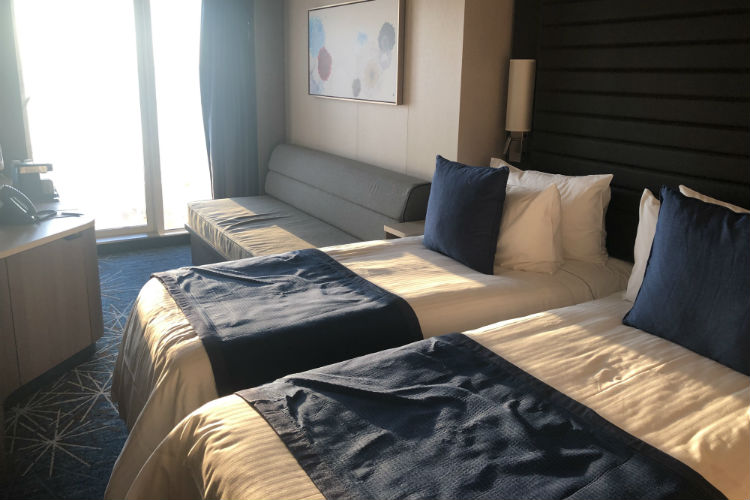 After a cocktail or two (which were delicious), we headed up to our staterooms to shower and change, ready for dinner. Our balcony stateroom was lovely, with a really large balcony. I was thrilled to find a coffee machine in the room and bottled water was also provided in sustainable plant-based packaging – well done Norwegian Cruise Line for these nice little touches. 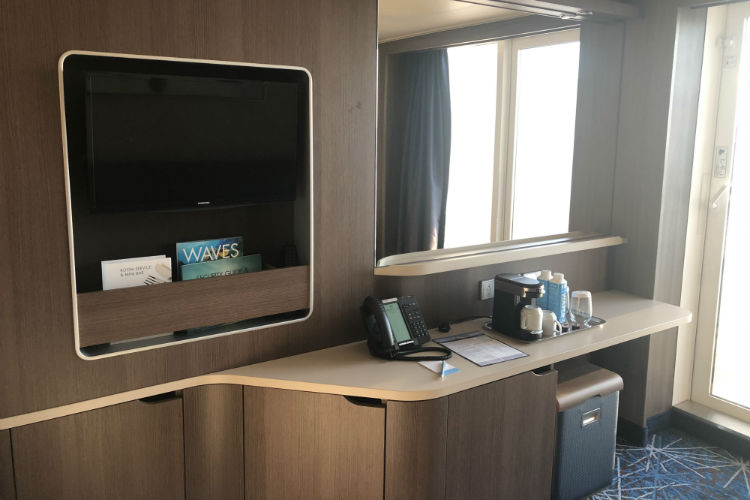 The bathroom was pretty spacious with a real glass door on the shower rather than the dreaded plastic curtain. Toiletries including shampoo, body wash, soap and body lotion were provided. My bed was probably the most comfortable bed I’ve ever slept in! It had one soft and one firm pillow, which was a nice touch. 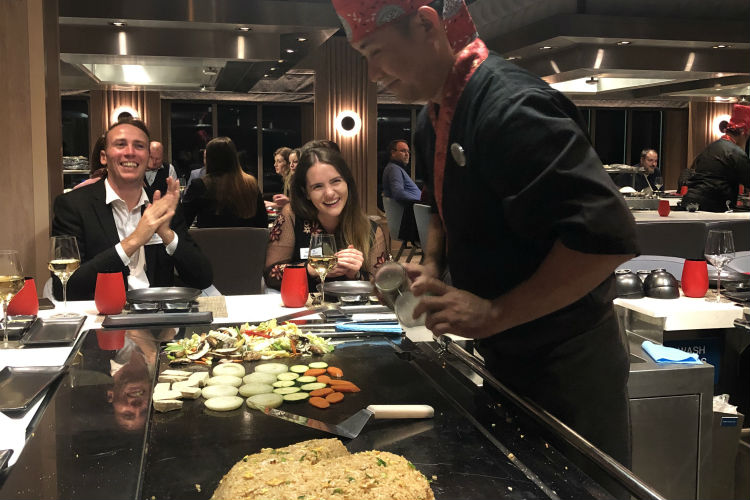 I was lucky enough to dine in the Teppanyaki restaurant which usually has an extra charge. The food here was exquisite but most impressive was the show put on by our personal chef. As we gathered around the hot plate, Chef Ernino juggled with knives, told jokes and even had us all singing and clapping along. There is an extra charge for the speciality dining venues, but judging from this one, they are well worth it for a treat. 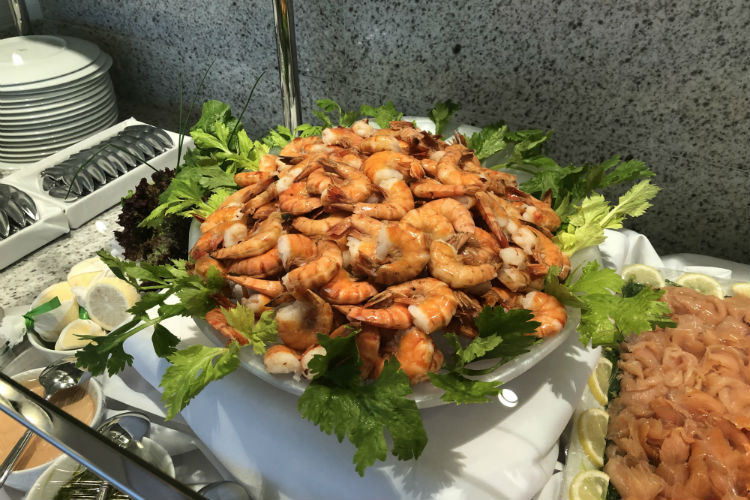 There’s really no need to spend any extra on speciality dining if you don’t want to, though; the food in the included restaurants was of such a high quality. The main dining room served a luxurious menu of king crabs legs, lobster tails and caviar which changed every day. The Local Bar & Grill has a whole host of pub favourites like burgers, nachos and pies. And the Garden Café Buffet was so large you couldn’t see from one end to the other, with a seemingly endless array of cuisine from around the world. 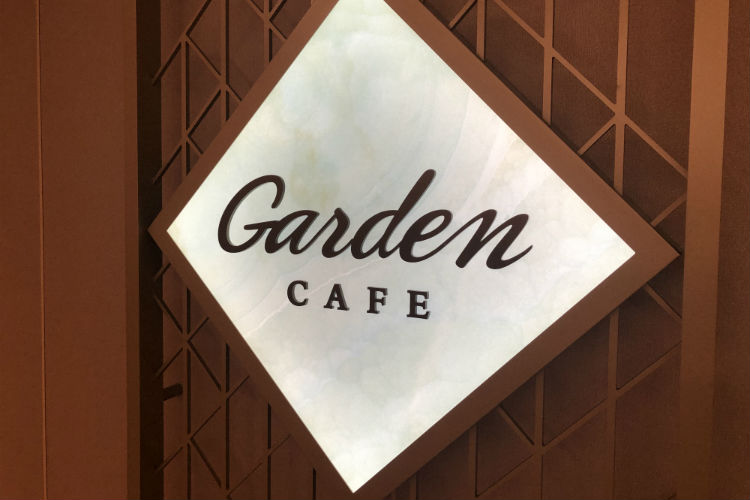 After dinner, we met for drinks in the Atrium Bar, which had a live band and a really fun atmosphere. There are so many bars and lounges on this ship, and the ones on deck 8 all have doors which lead to outdoor seating areas on The Waterfront – an outside area which wraps all the way around the ship. The Brew House was one of our favourites. This biker themed bar has 24 draft beers and over 50 different bottled beers. 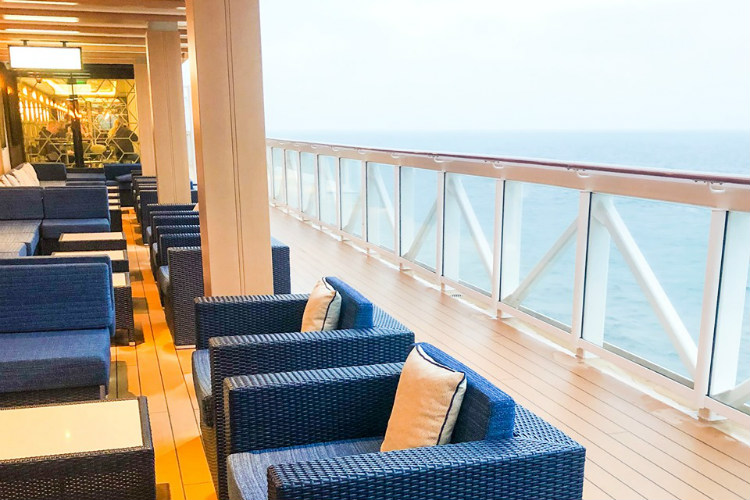 We enjoyed watching the nightly Beatles tribute act in the Cavern Club – which is strikingly similar to the original Beatles venue by the same name in Liverpool. Then we went on to the silent disco where we collected headphones and danced the night away to the music of our choosing. 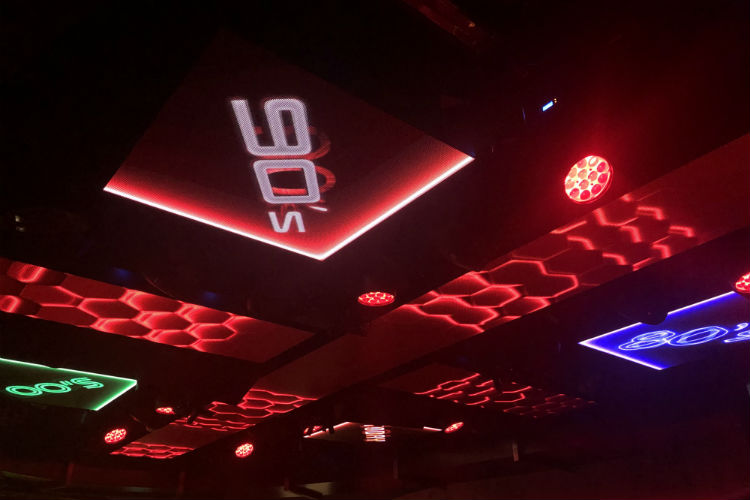 There are three shows to choose from on Norwegian Encore, including Cyndi Lauper’s musical Kinky Boots which has won six Tony Awards. There’s also a comedy club where you can see two stand-up comedians.

After a fun-filled evening we headed up to the top deck to see what it looked like in the night-time, and then retreated for an excellent night’s sleep in our super-comfy beds.

The next morning, we were up early to tour the ship. We headed up to deck 18 at the back of the ship to see the Encore Speedway go-kart track and the laser tag arena.

The go-karts on Norwegian Encore are real go-karts and they go pretty fast along the track which loops around over two decks. From the viewing area, we watched as they sped past on the 1,100-foot track which extended over the side of the ship. 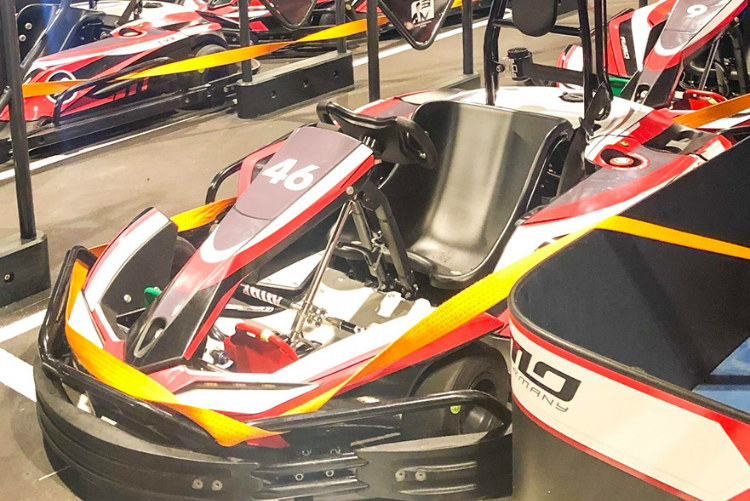 The laser tag arena on Norwegian Encore is massive too. It’s so easy to forget you’re on a ship with activities like these. The course is made up of ancient-looking pillars and statues interwoven with the tail of a giant serpent. Pretty cool! 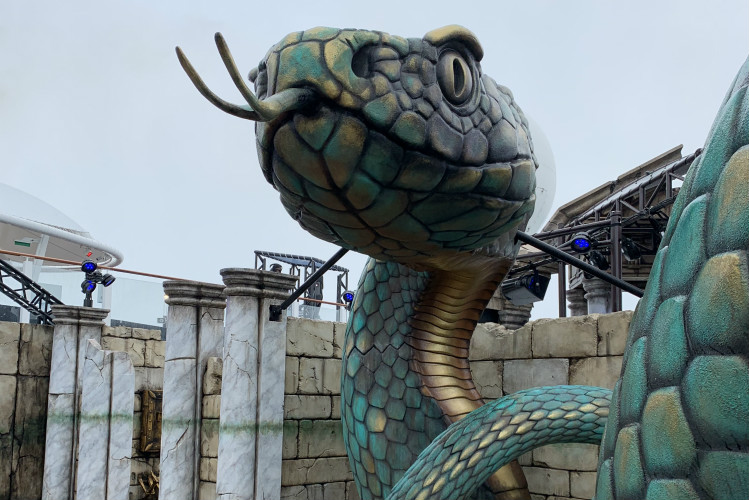 As it began to rain, we headed indoors to the Galaxy Pavilion – a huge room filled with virtual reality games. As four of our team climbed aboard a virtual rollercoaster, strapped themselves in and put on VR goggles, someone used their finger to draw the track which the rollercoaster would follow. It’s fair to say that the team looked absolutely terrified as they clung on and yelled “Oh ship!” 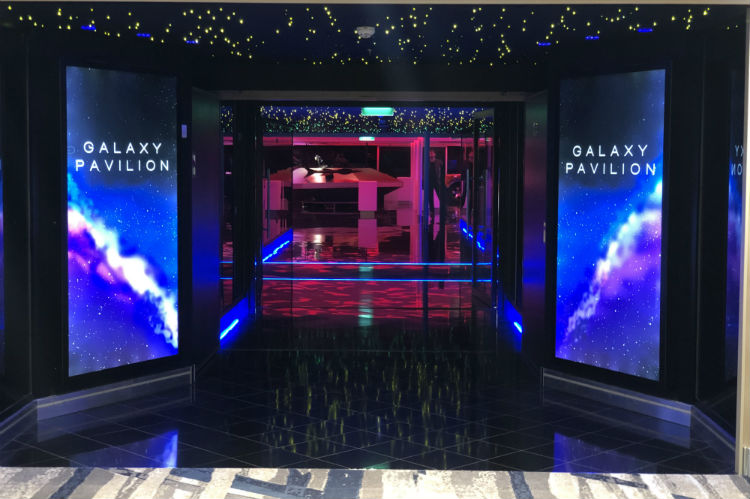 The Galaxy Pavilion was so much fun that it would be easy to spend the whole day here! But, we had more to explore so we continued our tour of the ship.

Norwegian Encore has two swimming pools as well as a kids’ splash area. By the pool, there are lots of loungers and a huge television screen. The splash area looked like lots of fun for children with tipping buckets, water jets and a medium-sized purple slide. 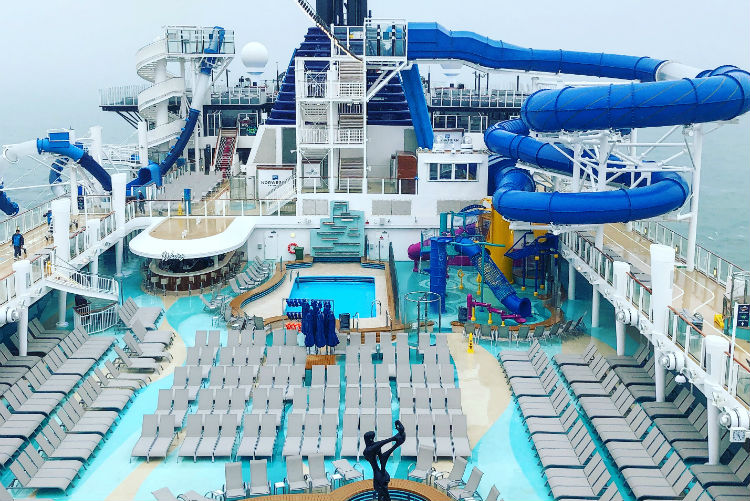 On the pool deck, there are two giant multi-storey water slides – the Aqua Racer and Ocean Loops. The Ocean Loops slide looked absolutely amazing with a drop-away floor, near-vertical chute and a see-through loop the loop which extended over the side of the ship. We wanted to ride it so we nipped back to our room to put on our swimwear and arrived back at the slides. But, sadly, due to the weather, we weren’t allowed to ride. Instead, we grabbed some cocktails in plastic glasses from the pool bar and headed to the hot tub which was lovely and warm despite the cold weather outside.

Norwegian Encore is a great ship for couples, singles and families alike. The kid’s club is absolutely huge and offers plenty of activities for children aged three to twelve. For younger tots, there’s the Guppies play centre, where babies and toddlers can play accompanied by their parents. Teenagers will love Entourage; the cool teen hang-out which looks like the best nightclub on the ship. 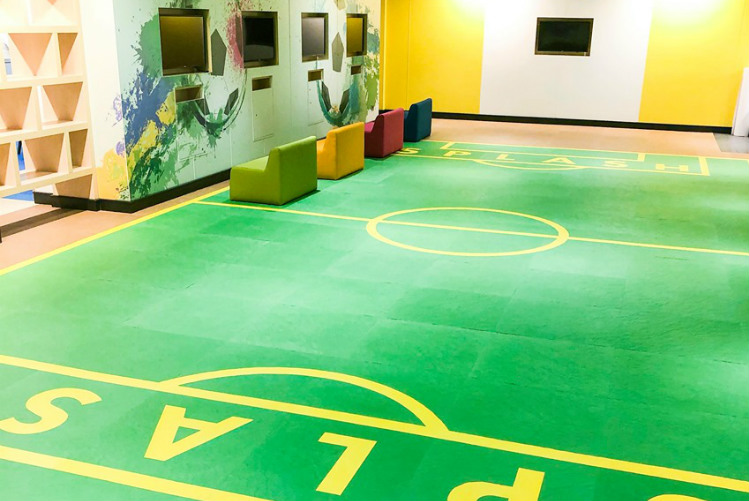 During our cruise, we were lucky enough to take a tour of The Haven. Norwegian Cruise Line’s Haven is a private complex which is reserved for suite guests. Guests staying in Haven Suites have access to an adults-only VIP swimming pool with a retractable roof along with hot tubs and in-pool loungers. They can also visit the Haven Restaurant and enjoy a private fine dining experience as well as the Haven Lounge which is a members-only cocktail bar and the Horizon Lounge which has panoramic views from the front of the ship. 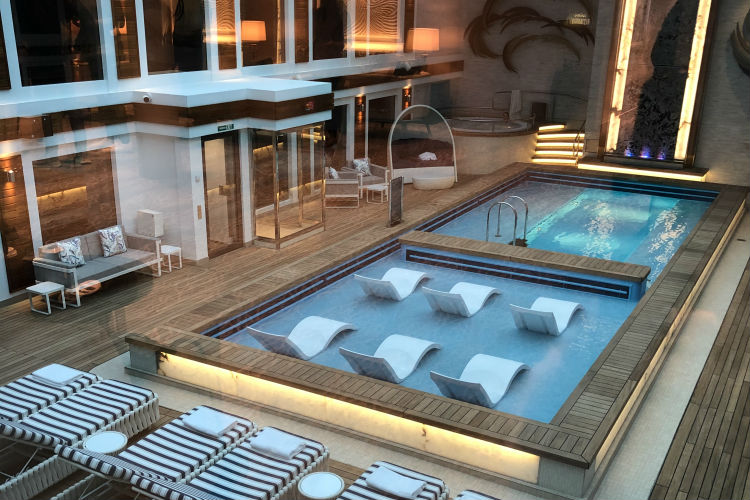 Whilst touring The Haven, we were able to sneak a peek into one of the two-bedroom family villas. This room was absolutely stunning – my favourite part was the shower which had a floor-to-ceiling glass wall overlooking the ocean!

Norwegian Encore is such an action-packed ship that The Haven is the perfect antidote to the hustle and bustle and it would be lovely to escape up here and relax. I could see it being very popular with families with teenagers; the parents could spend most of their time relaxing here whilst the kids go off and have the time of their lives on the rest of the ship.

If you’ve ever been worried about being bored on a cruise, choose a ship like this! Whatever the weather, there’s so much to do on-board Norwegian Encore that your only problem will be fitting it all in. 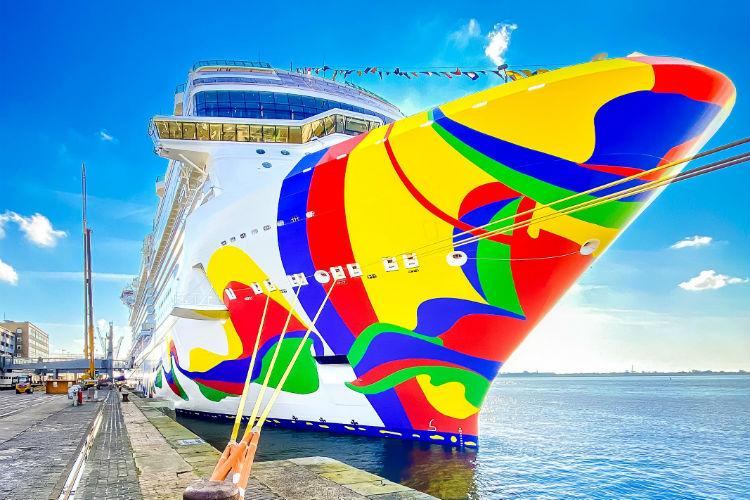 Norwegian Encore will be hugely popular with families with teenagers. It gives the option to have fun together as a family or to let kids go off and do their own thing.

Our only gripe about Norwegian Encore is that many of the activities, such as the laser tag, go karting and virtual reality area are chargeable. It’s also possible to spend quite a lot on drinks and speciality dining, which could mean that you have a significant bill at the end of your cruise.

However, Norwegian Cruise Line often have promotions such as the Free at Sea offer, which gives you extras such as Premium Beverage Packages, Speciality Dining Packages, Shore Excursion Packages and Wi-Fi Packages for just £99. Also, here at Cruise118, we like to give away free on-board credit when we can, which would come in handy to cover the cost of your activities on-board.

Gallery image with caption: Fred. Olsen Balmoral: Where tradition is far from stuffy