You wouldn’t expect to come across North America’s tallest waterslide while sailing through the Bahamas.

But there it is, on the horizon, a candy-coloured landmark standing proudly to attention and towering over the tiny castaway isle of CocoCay.

This is Royal Caribbean International’s newly-developed island resort called Perfect Day at CocoCay – a hedonistic playground that promises to thrill and chill with waterslides, pools and dazzling white-sand beaches that perfectly lend themselves to a tropical slice of R&R. 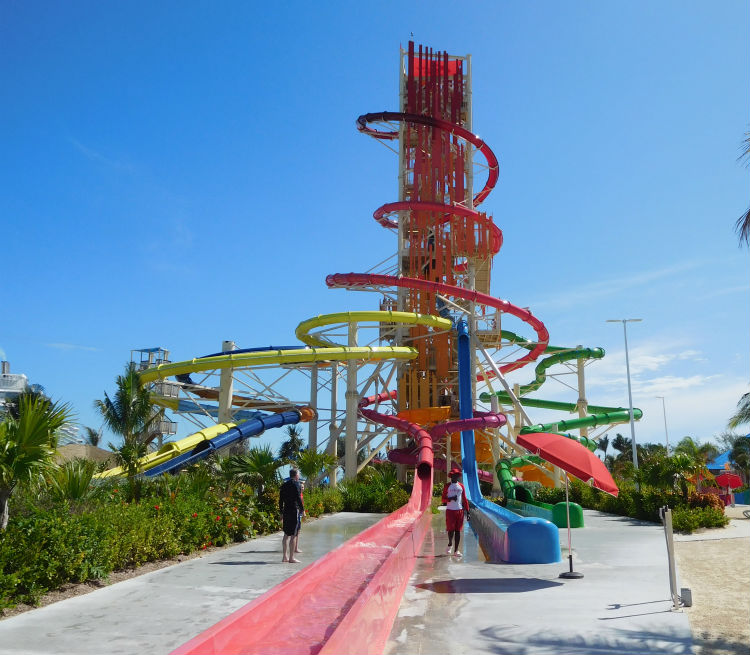 As we moor up, the eye-catching Daredevil’s Tower, which houses seven waterslides led by the record-breaking 135ft Daredevil’s Peak looks scarily stratospheric.

But it doesn’t deter my 16-year-old twin daughters, who are among the first to disembark and race off in a rush of enthusiasm to beat the crowds to the top of the tower and its infamous slide. 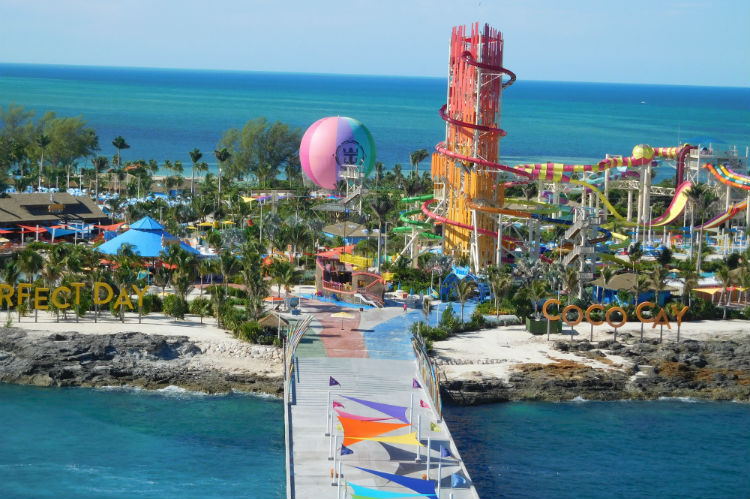 Before I know it, they’re back; overflowing with adrenaline and squealing with excitement at how meteoric their descent was, with lights and colours punctuating a whirlwind few seconds as they shot down twists and turns before blasting out at the bottom in a disorientated heap.

Watching other riders splashing down from this ride in various stages of shock and awe was a source of serious amusement for bystanders like me, who’d already decided to start with somewhat gentler rides. 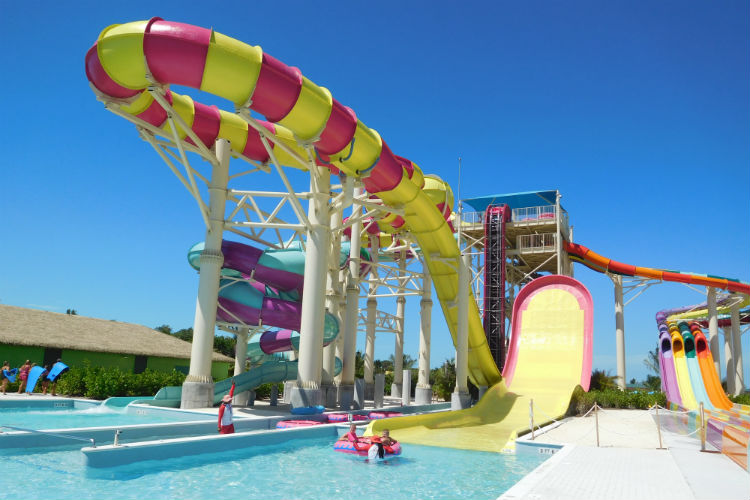 Though with twin-drop slides like the Dueling (correct) Demons, that send riders plummeting 75ft through the trapdoor of a launch capsule, and the 50ft high Screeching Serpent vertical speed slide, the alternatives are hardly a walk in the park!

There are gentler options, though my favourite is the Sling Shot – where the four of us whizz down a chute on a raft, before being catapulted on to a slope and soaring upwards in a “zero-gravity” moment before hurtling to the bottom in a chorus of screams.

It’s great fun, but does come at a price which I hadn’t expected as passes for the Thrill Waterpark area of Perfect Day cost $99.99 and apply to everyone aged four years and over.

Also, under-14s must be accompanied by a paying older guest, even if they don’t plan to use the slides themselves. 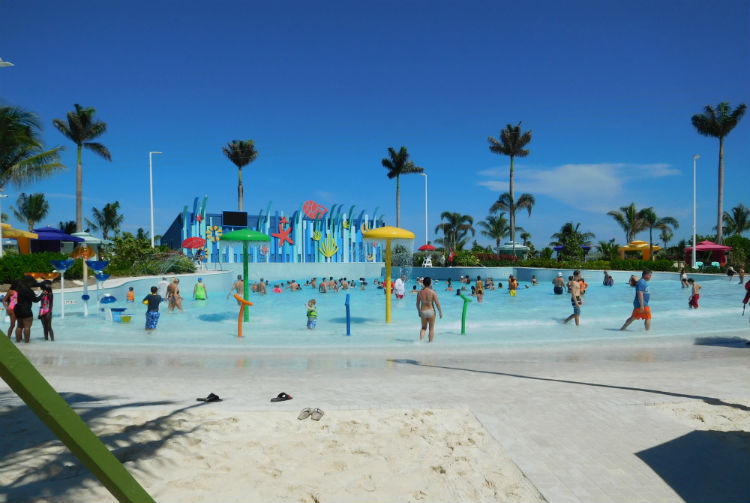 Aside from the waterslides (there are eight rides comprising 13 slides as some are dual or quad racers) – there’s a massive wave pool (the largest in the Caribbean), with a countdown clock that signals when surf’s up, prompting shrieks of joy from assembled wave-hoppers. 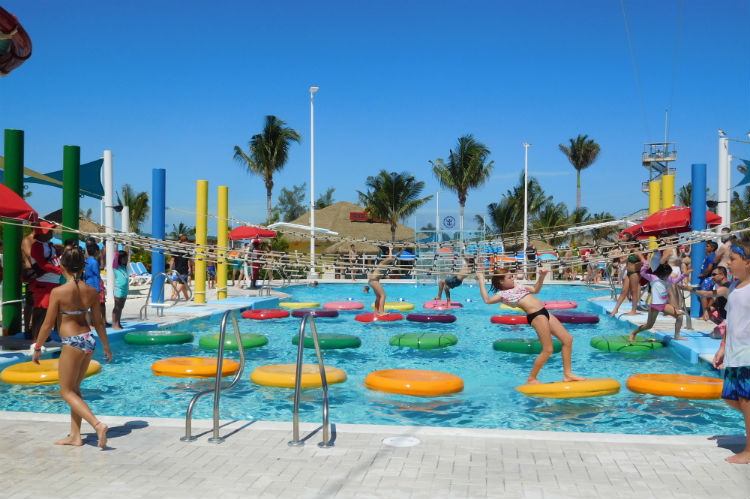 Nearby is the Adventure Pool, popular with youngsters for its floating lily pads, swing ropes and small rock wall.

But there’s more to Perfect Day than the thrills and spills of its water park and it’s not all about families as this $250 million mega-resort has plentiful chill-out zones perfect for couples looking to escape. Plus, from December, the resort will expand further with an expanded beach area, oceanfront pool and the first overwater cabanas in the Bahamas.

The existing three beach areas offer a mix of R&R pepped up with an enviable array of water sports that include kayaking, diving, parasailing and jet-skiing, plus excursions further afield in the Bahamas.

On Chill Island there’s snorkelling and jet-skiing, while South Beach has courts for games of volleyball, beach basketball and football – and there’s even a floating offshore bar which patrons can swim to for a cooling drink.

With its waterfall and fountain, Harbor Beach is a relaxing spot to pitch up and watch zip-liners swoop in on the final leg of the 1,600ft course that encircles the island.

Beach-lovers with deep pockets can hire the luxurious cabanas dotted along Perfect Day’s shoreline, which can accommodate up to eight people and come with an attendant. At up to $1,500 for the day (around £1,200), they’re not cheap, but that didn’t seem to have dented demand on my visit where they all appeared to have been booked out. 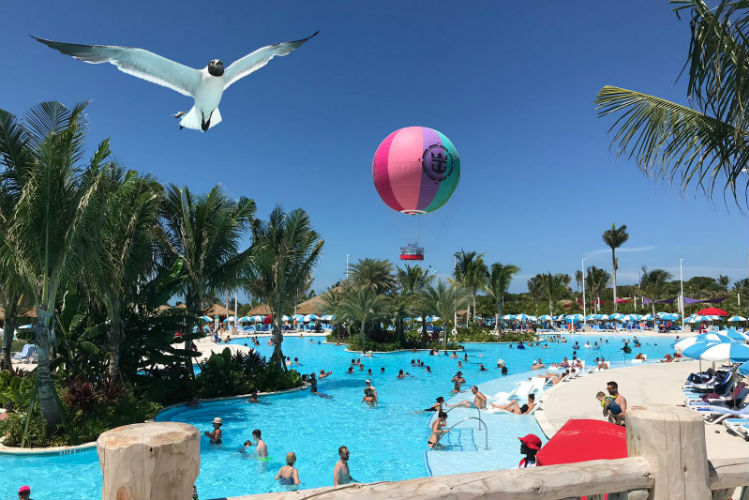 Another focal point is the vast Oasis Lagoon, the largest freshwater pool in the Caribbean with swim-up islands, a swim-up bar and even underwater music, while a short walk from here is Splashaway Bay, a small aqua park for youngsters offering waterslides, fountains pools and drench buckets. Both are free of charge. 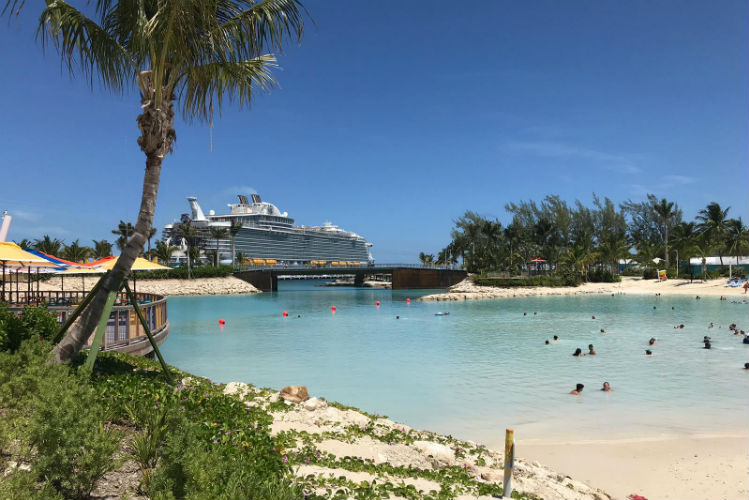 Even though there are 6,000 of us on the island, there’s enough room for everyone to spread out and while it feels busy, it’s not packed, though queues soon build up for the waterslides and at their peak the wait is more than an hour.

But there are numerous sun-bathing spots with ample sun-loungers and umbrellas, changing areas with secure lockers and complimentary water/drinks stations, plus a choice of dining areas too.

Getting around is easy as there’s a complimentary tram that trundles between the waterpark and South Beach, though everything is within a short walk of where the ships moor up. 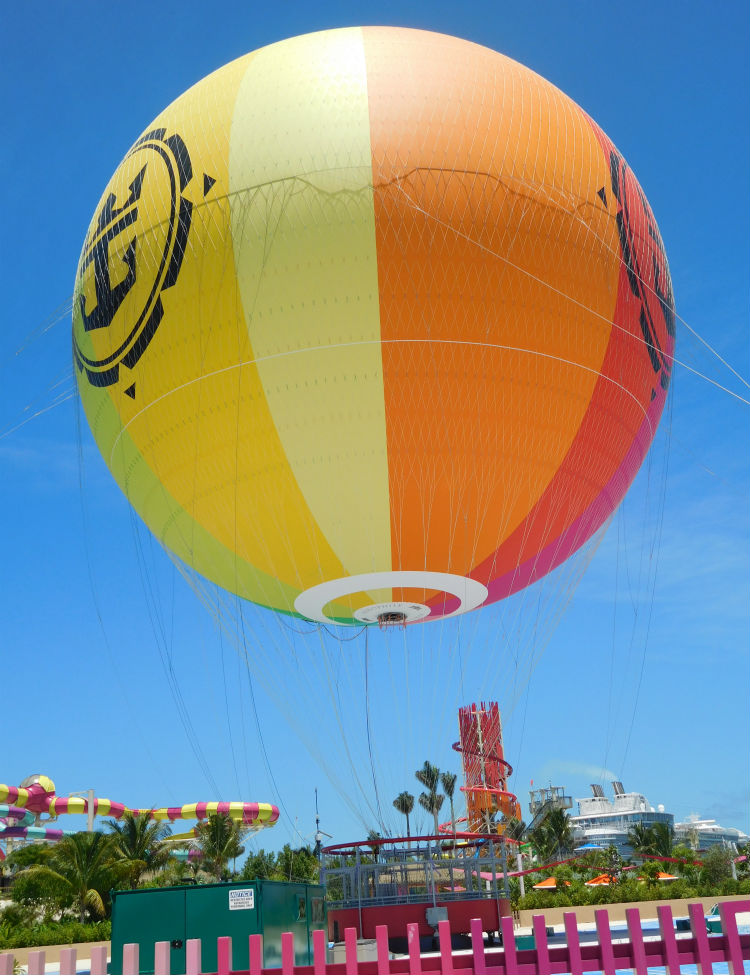 I find another good way to get my bearings is hitching a ride in the Up, Up and Away helium balloon which rises up 450ft, making it the highest point in the Bahamas. 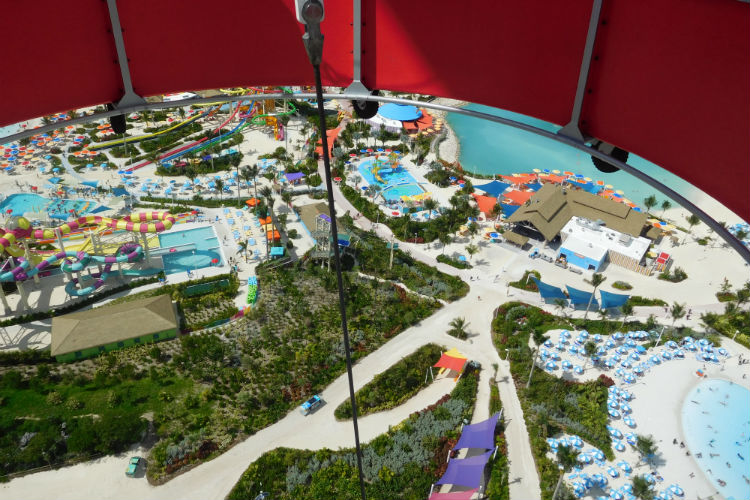 The views over Perfect Day and beyond are sublime and unlike the park’s next highest point at Daredevil’s Peak, (which funnily enough, I never got around to trying!) I didn’t even need to get wet to appreciate them.

Would you love to set sail with Royal Caribbean to this exclusive island? Find our latest deals to this extraordinary destination by clicking the button below. If you would like to know more, call our Cruise Concierge team on 0808 1234 118 for expert advice.

Gallery image with caption: Which cruise line is best for babies and toddlers?

Gallery image with caption: The best cruise lines for families