Warning: count(): Parameter must be an array or an object that implements Countable in /var/www_blog/advice.cruise118.com/htdocs/wp-content/themes/crusie118-cruise-advice/library/metabox/init.php on line 714
 Independence Of The Seas: Other Cruises To Choose | Cruise118.com

Earlier this year, Royal Caribbean announced plans to redeploy newly refurbished Independence of the Seas to the Caribbean in 2020, rather than her prior planned UK season.

Though it’s a sad occasion for many of us who were looking forward to seeing one of the UK-favourites set sail from our home country, we’re also here to tell you that it offers up plenty of alternatives that are just as good! Whether you were looking forward to experiencing a newly refurbished ship or wanted to set sail on Royal Caribbean, or even just from the UK, we have a range of options for you to consider.

So, why has Royal Caribbean decided to cancel Independence of the Seas 2020 UK season?

The reason for this, according to the cruise line, is due to the phenomenal demand Royal Caribbean is seeing in North America, particularly in line with the exclusive and new private island – Perfect Day at CocoCay.

Anyone who had a 2020 cruise aboard Independence of the Seas has been offered alternative sailings aboard Anthem of the Seas – now the only other ship sailing from the UK in 2020 – as well as future cruise credit for any future bookings, based on their stateroom category and sailing length.

What alternatives are available?

This depends on how you pick your cruise! You might select your cruise based on the ship, looking at the key features to experience on-board. Or you could look at the cruise line, whether you’ve heard good things about them or sailed with them before. It might even be the destination or the itinerary, with particular ports of call on your radar to set sail to.

No matter which of these are the reason you pick your cruise, here are some alternatives to Independence of the Seas in 2020.

Ships similar to Independence of the Seas

You might have chosen to cruise aboard Independence of the Seas because of the ship itself. Well, she’s been newly refurbished in 2018 and offers plenty of brand new features on-board, so we can see why this might have been the case! If you were really keen to get on-board Independence of the Seas, she is sailing from Fort Lauderdale around the Caribbean on a range of two- to seven-night sailings, all of which visit the extraordinary Perfect Day at CocoCay island.

If you’re looking for something similar, but don’t fancy the Caribbean, why not consider her sister ships, Freedom of the Seas or Liberty of the Seas, both of which are members of the Freedom Class alongside Independence of the Seas. 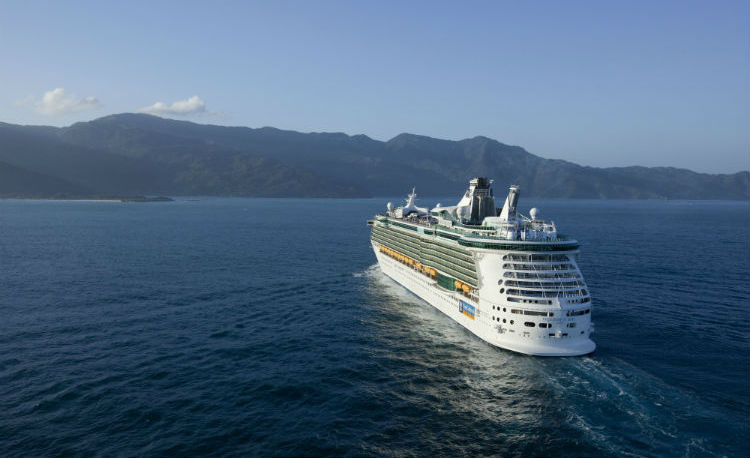 Both Freedom of the Seas and Liberty of the Seas offer sensational entertainment, thrilling activities and mouth-watering dining venues, many of which are similar to what Independence of the Seas offers. Expect to see the iconic FlowRider, rock-climbing wall and ice skating on-board both, as well as dining venues such as the steak favourite, Chops Grille; Italian-inspired Giovanni’s Table; and American-diner Johnny Rockets.

Ships to consider from Royal Caribbean

So, you might not have a huge draw to the ship itself, but you love the cruise line? Well, with Royal Caribbean there are certainly plenty to pick from. There are 26 ships in the fleet, varying from the small Radiance Class ships at around 2,500 guests to the grand Oasis Class at almost 7,000 guests! 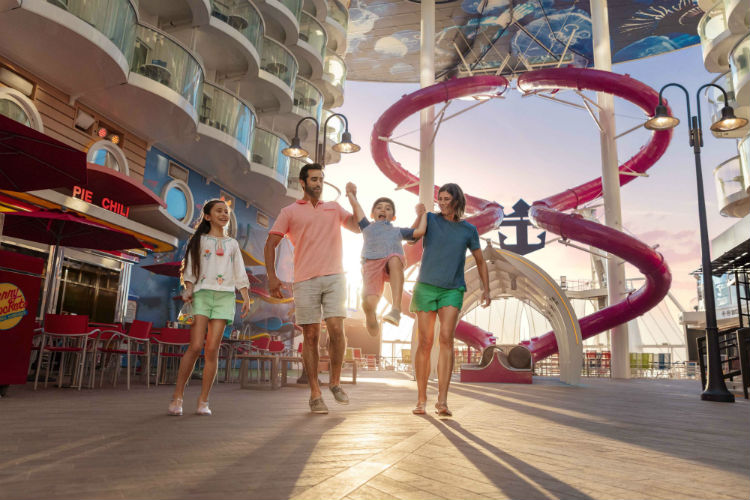 For the best variety and activities to enjoy on-board, we recommend either the Oasis Class ships or the Quantum Class ships. That’s not to say any others aren’t worth considering, but these ships offer innovative features and the most options that Royal Caribbean guests know and love.

Oasis Class ships feature extraordinary activities such as a zip line nine decks above the Boardwalk; a fairground carousel and an ice skating rink. There are seven neighbourhoods on-board Oasis Class ships, each catering to different styles and tastes meaning there’s something for everyone to enjoy on-board. The ships in the Oasis Class include: 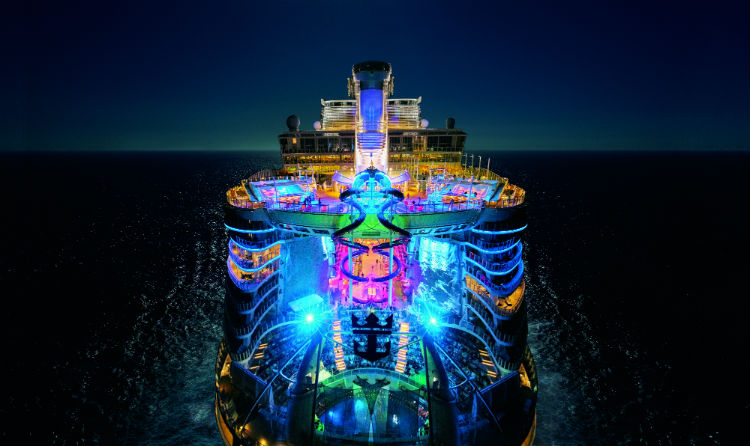 Quantum Class is the latest class of ship for Royal Caribbean, including the newest addition – Spectrum of the Seas. With this Class of ship, you can enjoy the North Star observation capsule, a skydiving simulator and the immersive three-deck high Two70° lounge and performance venue. 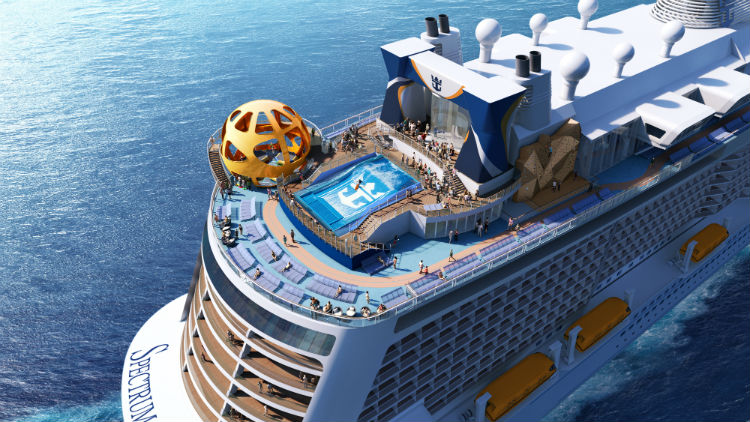 Itineraries similar to Independence of the Seas

As Independence of the Seas was one of only two ships sailing from the UK for Royal Caribbean, it’s likely that many customers chose her for this point alone. Sailing from the UK is a huge convenience, particularly for those who don’t like flying. You can drive to the port, drop off your car and head on-board to start your holiday right then and there – often before your ship has even departed!

Meanwhile, there are other cruise lines to take a look at that are great alternatives to Royal Caribbean, all of which sail from the UK.

Carnival Cruise Line sailings from the UK in 2020 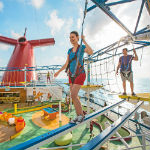 Carnival Cruise Line is all about having fun during your sailing, similar to Royal Caribbean’s offering. It’s a hugely family-orientated cruise line, jam-packed with fantastic activities such as high ropes courses, Build-A-Bear workshops and some of the largest water parks at sea.

Ships in the fleet sailing from the UK in 2020 include Carnival Legend and the brand-new Carnival Mardi Gras, which will feature the first-ever rollercoaster at sea!

Celebrity Cruises’ sailing from the UK in 2020 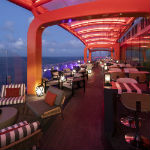 That’s not to mention that she will have been recently refurbished in 2020 as part of the Celebrity Revolution – a $500m investment across the fleet. As for Celebrity Apex, she is the sister-ship to Celebrity Edge so expect to see modern luxury first hand. With innovative dining venues, revitalised social spaces and that extraordinary Magic Carpet, it’s like no ship you’ve ever seen before!

MSC Cruises sailing from the UK in 2020 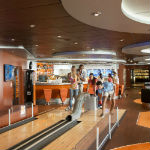 MSC Cruises are similar, with MSC Preziosa sailing from the UK.

This ship features a great water park, including one of the longest water slides at sea, as well as the heavenly MSC Aurea Spa, thrilling 4D cinema, bowling alleys and plenty of places to eat and drink.

Norwegian Cruise Line sailings from the UK in 2020 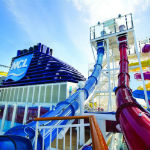 Norwegian Cruise Line matches the fun-factor that Royal Caribbean boasts, with bowling alleys, go-kart racing tracks and laser tag. The freestyle cruising aspect is also another benefit, with the ability to dine where and when you like, with who you like – great for all of the family! 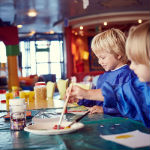 P&O Cruises has a few family-friendly ships in the fleet, each of which has a wide range of kids’ activities and programming. With a kids’ club offering five age-specific clubs for six months to 17 years, its the perfect place for your little one to run around, make friends and give you some time to relax.

That’s not to mention activities such as the Cookery Club for family cooking classes; Headliners Theatre; and Sundaes Ice Cream Bar. 2020 is also the year that the long-awaited Iona joins the fleet, offering a totally new P&O Cruise experience for all of the family to enjoy! P&O Cruise ships which are sailing from the UK in 2020 include Arcadia, Aurora, Azura, Britannia, Iona and Ventura.

Princess Cruises sailing from the UK in 2020

With the excellent kids’ clubs offering kids from three years to 17 space to relax, unwind and have fun, as well as pools, splash areas, outdoor cinema, cooking classes and more, it’s a great cruise line to consider.

See all Princess Cruises sailings in 2020

Prices similar to Independence of the Seas

If the cruise line, ship, or itinerary don’t matter to you, the price might be your main focus. Royal Caribbean sometimes runs campaigns offering free drinks, free kids’ places or even their ever-popular WOW Sale.

If you’re looking to bag a bargain and snap up a good deal, cruise lines to consider as an alternative include MSC Cruises, Celebrity Cruises or Norwegian Cruise Line. 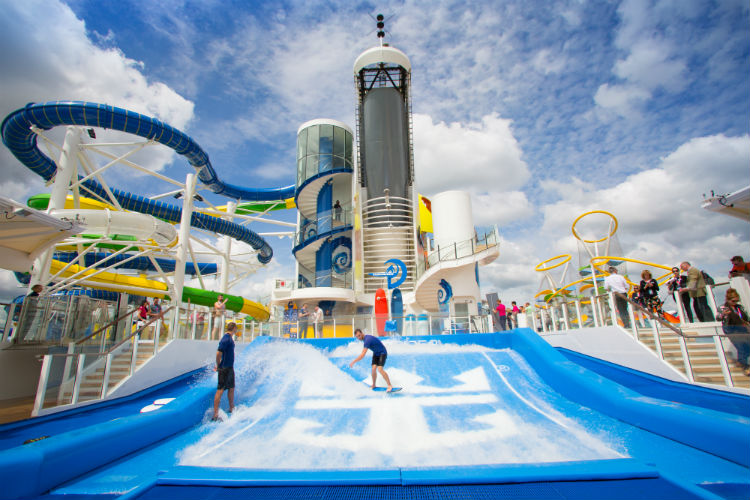 Duration similar to Independence of the Seas

Independence of the Seas offered many shorter duration cruises, with very few other cruise lines offering the same, some of which are even from the UK. Why not consider P&O Cruises which has a range of sailings from two-nights to five-nights long aboard ships such as Arcadia, Ventura, Aurora and Britannia, all departing from the UK.

Which would you pick?

So there’s our selection of brilliant alternatives to Independence of the Seas in 2020, with a range of fun-loving, family-friendly cruise lines and ships to make your cruise holiday one to remember.

From the shores of the UK to the coastlines of the world, which of these ships would you pick for you 2020 sailing? Let us know in the comments below.